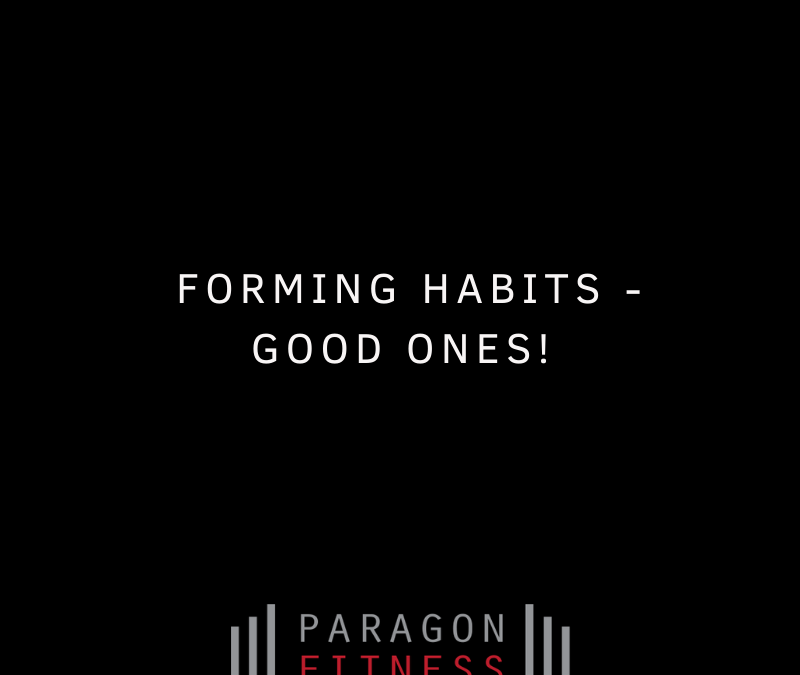 Every year around February, we in the fitness industry see people dividing themselves into two groups: one group has not only followed through on their new year’s resolution to get healthier but has formed a habit of working out that is starting to gain momentum; the second and unfortunately much larger group has fallen back into old routines that rarely involve exercise. What is the difference between the two groups? Do some people have discipline and self control coded into their DNA while the rest of us are doomed to be weak willed and lazy? The answer, in a word, is NO. According to Dr. Wendy Wood, Provost professor of Psychology and Business at the University of Southern California, willpower has very little to do with forming good habits. In her excellent book “Good Habits, Bad Habits: The Science of Making Positive Changes That Stick”, Dr. Wood explains how willpower and, in fact, conscious thought are not the driving forces in forming habits, good or bad.

So how do we change our behavior? Because, after all, when we are either trying to start and sustain a positive, healthy habit like exercise or stop a negative, unhealthy habit like smoking, we are in the business of behavior change. I highly recommend reading Dr. Wood’s book (and no, you can’t borrow my copy) but for now here are her three bases of habit formation: context, repetition and reward.

To explain the role of context in habit formation, Dr. Wood uses the concept of friction. When resistance to a behavior is low, we are more likely to engage in it; when it is high, we are less likely. When the Surgeon General reported in 1964 that tobacco was the leading cause of preventable death in the United States, the percentage of smokers in this country did NOT change. But when laws were enacted that banned smoking in workplaces and restaurants, smoking went from 40% of Americans to 15%. Higher friction.So how do we use friction to change our habits? If, for example, exercise is a habit we want to form, we can find a gym that’s on our way home from work. According to a 2017 Wall Street Journal article, people who traveled 3.7 miles to the gym went five or more times a month while people who traveled 5.1 miles only went once a month. I keep a packed gym bag in my car so that wherever I am I’m ready to work out. Wearing gym clothes under your work clothes, having an exercise mat in the middle of your living room, placing a stability ball instead of an easy chair in front of your television – all of these reduce friction. We can also increase friction to curtail habits. Most of us know that Oreo cookies in a basement storage closet (or better yet left on a supermarket shelf!) are much less likely to be eaten than ones on our kitchen counter. Studies show that simply placing foods we would like to eat more of in a visible place and foods we would like to eat less of behind a closed kitchen cabinet can change our eating habits.

The second basis of habit formation is repetition. It’s not earth shaking news that repetition leads to habit formation but how much is required? When I worked for a big box gym we were told (and told to tell our clients) that it takes three weeks to form a habit. That’s a very popular number that has been thrown around for years but it’s actually not at all accurate. How much repetition it takes to form a habit depends on the complexity of the behavior. If our goal is to form a habit of drinking a glass of water every morning, that will probably take less repetitions than a goal of taking a daily yoga class. So how do we achieve that magical number of repetitions? In my experience working with clients as well as my own personal experience, I’ve found that there are two powerful concepts that can keep you on that repetition path. First of all, using the concept of friction, make the goal much, much smaller. If you’ve never taken a yoga class, the chances of your taking a daily hour long class and sustaining that behavior are very low. But if you simply made the goal that you would do one downward facing dog a day, that’s a much more doable goal and one that can grow into a full blown yoga class. I’ve given many of my clients homework with the instructions that if they do ten minutes, or five minutes or even one minute a day, they’ve succeeded. Those clients tend to not only meet but often exceed that modest goal. The second concept is this: repetition doesn’t mean perfection. If you miss a day of whatever behavior you’re trying to form into a habit, you haven’t derailed all your progress. Habit formation is not that fragile. Rather than thinking perfection, think persistence.

The third basis of habit formation is reward. As much as we’d like to think that our conscious brain is in charge of our behavior, Dr. Wood’s research indicates that about 43% of our behavior happens habitually and subconsciously. Dopamine, often referred to as the reward chemical, is a neurotransmitter that reinforces behavior in our subconscious brain. Without dopamine, behavior rarely persists. So how do we stimulate dopamine production? One way is to make the behavior FUN. If you hate an exercise program you will ultimately quit but if you enjoy martial arts or dance or ice skating, you will stimulate dopamine production and reinforce that behavior. If you are a social creature you may need to join a group class to enjoy working out but if you’re more solitary by nature you may get more enjoyment out of running on your own. Another way to produce dopamine is by setting a very short term, doable goal and reaching it. If you set out to do five pushups and you do five – dopamine!

So create a context for your desired behavior by reducing friction, repeat that behavior and have fun doing it! You may be surprised by the results.